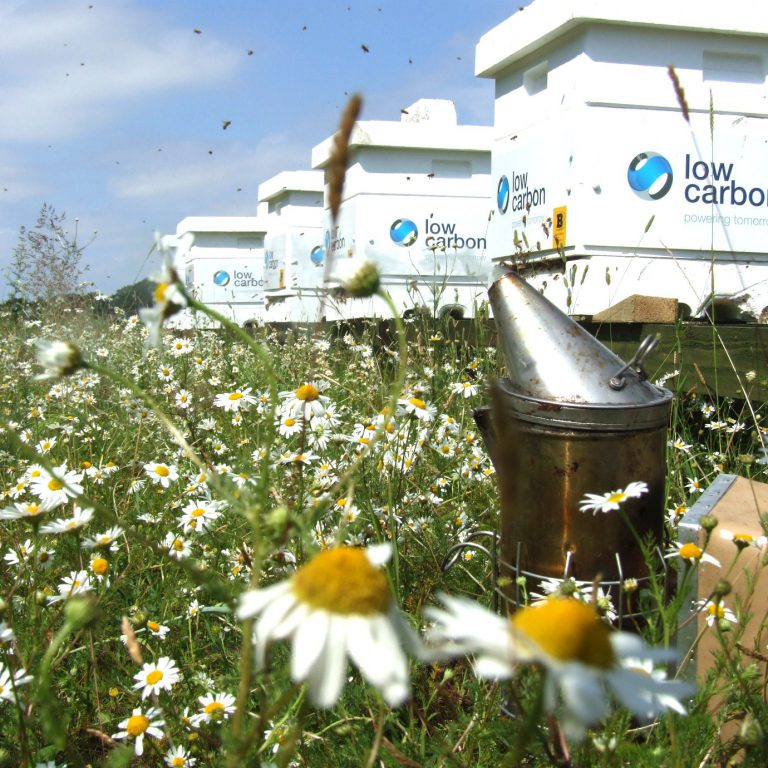 Low Carbon partners with Plan Bee to install 25 beehives on five of its solar farms across southern England in a bid to promote greater biodiversity and boost the local bee population.

Honeybee populations have halved in the UK over the last two decades, according to research by the University of Reading, with climate change, mites, pesticides and disorders, contributing to this. Plan Bee partners with businesses like Low Carbon to support and increase populations of this valuable insect, which is an essential component in the balance of our delicate ecosystem.

Quentin Scott, Low Carbon’s Marketing Director said: “We are committed to protecting local habitats and ecosystems on our solar farms. Encouraging biodiversity should not be a bolt on for renewable energy companies, but rather a core responsibility. Protecting bees, insects and other species is a crucial part in the fight against climate change and we look forward to continuing our work with Plan Bee in the future.”

The renewable energy investor is making every effort to play a central part in the farming communities surrounding its sites. By locating on fallow land that is unusable for agriculture, Low Carbon is delivering a long-term investment in these areas.

Quentin Scott added: “By taking measurable steps to install beehives on our solar farms, we hope to show that investing in solar PV on their land needn’t be at the cost of local wildlife. Through our community outreach, we want to help champion biodiversity”

Each of the five sites will host more than 300,000 bees to help cultivate local crops and encourage biodiversity. A remote monitoring system is planned, which will allow Plan Bee to keep tabs on each bee colony by monitoring parameters such as brood temperature, humidity, hive weight and weather conditions.

Each hive will produce high quality local honey, which will be sent to key stakeholders and partners in the ongoing effort to raise awareness of the plight of bees and continued support for renewable energy.

Warren Bader, Plan Bee Ltd’s CEO said: “We’re delighted to be working with a prestigious renewable energy company like Low Carbon, who share our vision on biodiversity and sustainability. They’re playing a part in supporting the local communities in which they work. Like the bee community they are working together for the betterment of the collective. While renewable energy companies are sustainable by their very nature, we offer them the opportunity of improved ROI, which we like to think of as ‘return on involvement’.

Plan Bee works with a number of high profile businesses across the UK to support their sustainability needs. Low Carbon is matching the commitment already shown by companies the likes of Highland Spring, Kelloggs, British Gas and Balfour Beatty. Some of Plan Bee’s clients are also utilizing the community engagement offering of the company to deliver legacy projects in areas where they have delivered large constructions or where work has had an environmental impact.

A number of renewable energy companies are already talking to Plan Bee to help extend their sustainability offering, improve their community engagement and corporate citizenship; and involve employees in biodiversity projects to improve company morale, with tangible results. This improved sustainability ethos has business benefits as well, by supporting planning requirements, as well as in the bids and tendering process.