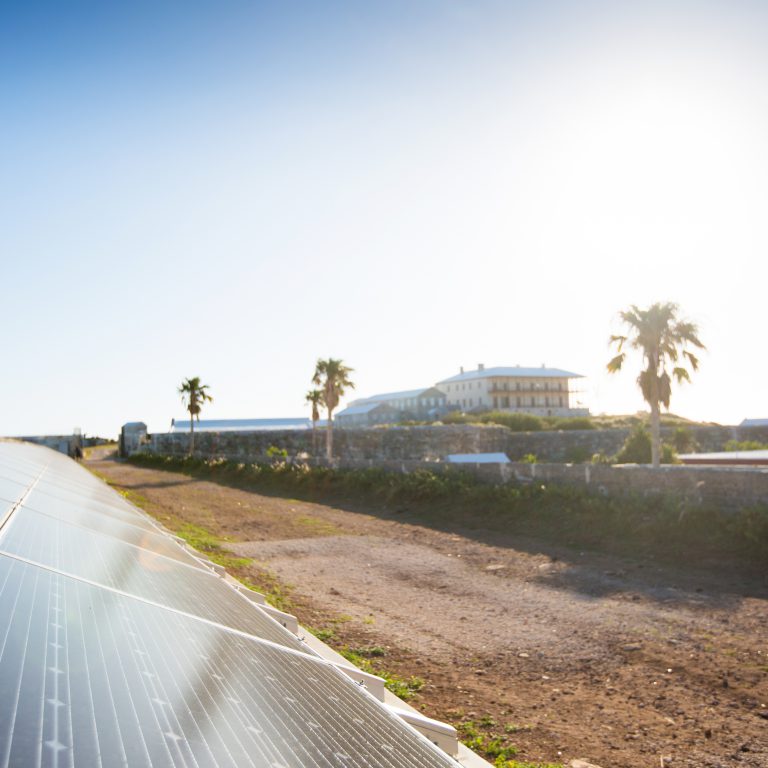 The solar panel installation was funded through a partnership with Low Carbon, Land Rover BAR and a generous donation from the Stempel Foundation, with installation led by local company BE Solar. The panels will help offset the energy used by Land Rover BAR while competing in Bermuda during this year’s America’s Cup, and will contribute to the team’s efforts to be the world’s most sustainable sports team.

The installation consists of 194 high performance solar panels installed along the museum’s northwest rampart, and is expected to generate more than 93,600kWh of clean energy, save 43 tonnes of CO2 per year, and cut the museum’s electricity bills by up to 20 percent. Solar panels have already been successfully installed by Low Carbon at Land Rover BAR’s base in Portsmouth, enabling the sailing team to save more than 100 tonnes of CO2 across the two projects each year.

The panels installed at the National Museum of Bermuda will completely offset the team’s Bermuda-based energy consumption within two years and will continue providing power to the island for a minimum of 30 years. The site will also be a valuable educational resource for local school children about the importance of renewable energy in building sustainable island communities.

“This installation is going to make a fundamental difference to the local community for years to come. We’re delighted to be able to support the museum team, and our partners Land Rover BAR in their efforts to be the world’s most sustainable sports team.“We also shouldn’t underestimate the importance of this legacy project. Land Rover BAR are drawing attention to the importance of sustainability, and showing their commitment to giving back to the communities they’re part of during training and competition. I can only thank and congratulate them for making a difference and for setting an example that we should all look to emulate.”

“When Ben Ainslie Racing was first established, we set ourselves the target of becoming the UK’s most sustainable sports team. This latest installation at the National Museum in Bermuda is further evidence of the steps we’re taking to meet that goal. “Whilst the sailing community will be closely watching the racing in Bermuda over the coming weeks, it’s important that we also leave a positive legacy. The solar panel installation at the National Museum is important in helping to reduce the team’s short term impact, but also for offsetting our carbon footprint and helping to demonstrate how we can build sustainable island communities.”

James Hallett, Chairman of the National Museum of Bermuda, said:

“We’re grateful to Land Rover Bar, Low Carbon and the Stempel Foundation for their generosity. The importance of this installation can’t be underestimated. Not only is it helping to reduce our carbon footprint, and will help educate local young people, it’ll also significantly reduce our energy costs. We expect our electricity bills to fall by 20 percent, and this means we can dedicate more funding to cultural heritage preservation.”

Travis Burland, Sales and Engineering Director for BE Solar, said:

“The BE Solar team are delighted to complete Bermuda’s largest ground mounted solar installation. This will provide the National Museum of Bermuda with notable sustainability benefits, both in terms of its carbon footprint reduction and a significant decrease in their energy costs. As a result this project has seriously empowered the ongoing preservation of Bermuda’s cultural heritage. It was a sincere pleasure to work together with Low Carbon, Land Rover BAR, The Stempel Foundation, and The National Museum of Bermuda to develop and complete this fantastic legacy project for our island.”

Ben Ainslie Racing (BAR) was launched on June 10th, 2014 in the presence of Her Royal Highness The Duchess of Cambridge. The team was conceived by four times Olympic gold medallist and 34th America’s Cup winner, Sir Ben Ainslie, with the long-term aim of challenging for Britain and bringing the America’s Cup back home to where it all began in 1851. Ben has developed and will lead a British entry capable of winning the prestigious trophy, something Britain has so far never managed to achieve. Land Rover BAR is a commercial sporting team, with a number of individual private investors alongside corporate partners. The team is made up of some of the best British and international sailors, designers, builders and racing support. Sports teams represent key role models in society. This privileged position is not taken for granted at Land Rover BAR. The team believe our influence should extend far beyond the race course, and have put sustainability at the heart of operations since launching the team with Exclusive Sustainability Partner 11th Hour Racing in 2014. The team have built a new headquarters in the centre of Portsmouth, the 74,000 sq ft. building houses all the team’s activities, and will welcome the public into its Tech Deck education centre. The 1851 Trust is the team’s official charity, and HRH The Duchess of Cambridge is its Royal Patron. Portsmouth will host a second Louis Vuitton America’s Cup World Series event on 21st-24th July 2016. Almost a quarter of a million spectators enjoyed the action in Portsmouth in 2015, with 25,000 of them taking to the water – more are expected to come back in 2016 to watch the racing and cheer for the home team.

About the National Museum of Bermuda

The National Museum of Bermuda, formerly Bermuda Maritime Museum, is a non-government, not-for-profit Bermuda Registered Charity (No. 136). For four decades the Museum has been a steward of Bermuda’s cultural heritage, championing its preservation through collecting practices, exhibitions, restoration projects, conservation, research, publications, education and archaeology.

BE Solar is a fourth-generation, 80 year old Bermudian company dedicated to providing the highest quality solar and energy efficiency solutions. BE Solar is focused on making a stronger and more secure Bermuda by supplying homes and businesses with holistic and comprehensive energy solutions. The BE Solar mission is to empower people and businesses to make the smartest investments that save money and strengthen the Bermudian economy.