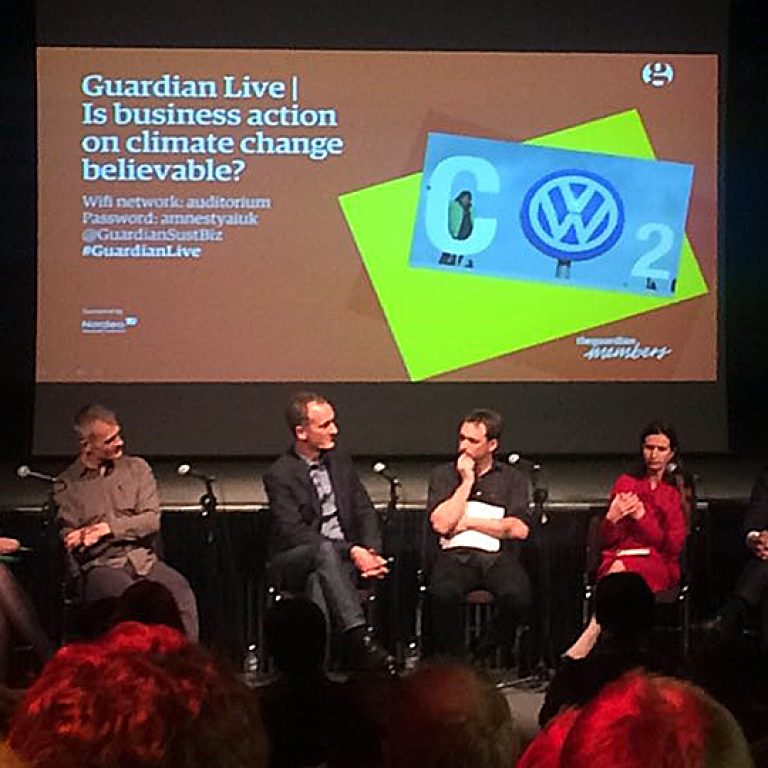 Fresh from COP21, we attended a debate run by Guardian Live, which aimed to discuss the topic of business action on climate change, and whether it was authentic and adequate in today’s society.

The panel comprised of a range of perspectives and figureheads within the sustainability sphere, from Katherine Garrett-Cox, CEO of Alliance Trust and a high-profile city advocate on climate change, to Caroline Lucas, Green Party MP and long-time campaigner on climate change. Other panellists were Steve Howard, head of sustainability at IKEA, which has made a variety of climate pledges, Kevin Anderson, from the Tyndall Centre for Climate Research and Sasja Beslik, from Nordea Responsible Investments, which plans to end some of its coal investments.

Conversation began with the current state of play and the fact that actually, most companies do deliver on the targets that they set. But the question remains that in a world of growing scrutiny on corporate giants and their ‘green’ initiatives, are these targets sufficient? And what about those that don’t set targets at all? We need to foster an environment of both holding companies to account, but also where the corporate sector takes the lead in sustainability measures.

Who exactly companies should be held accountable to remains a question for debate. We aren’t going to be able to solve anything until the corporate and commercial sector is involved, as they are fundamental to change. Businesses have the power to change conversations and take a stand for regulation, strong policy and enforced targets and accountability. This movement cannot be led by altruism or volunteers alone, we need strong leadership from the corporate sector. But the practices that businesses put in place must also make solid business sense and be based on commercially sound practices. As a result, we will create a culture of sustainable business both economically and environmentally.

On a deeper level, several of the panel members called for an overhaul of entire business models. If businesses shifted their production processes to sell durable, long-lasting products, then they would be more sustainable. As can be expected, a lot of them don’t want to have this discussion as it will mean a reduction in profit, and a slowing of growth. Similarly, individuals should revaluate their own personal value chains, and build these around experiences and lifestyle, rather than products. Achievable goals for both businesses and individuals include embracing the circular economy, and using methods such as reusing, reducing and recycling waste in order to increase levels of sustainability.

A couple of the panel asked whether it is at all possible to achieve ‘green growth’. Or can we decarbonise growth and can we do it quickly enough? Again, the focus here should be on achieving commercially viable business models which pay attention to sustainability measures. Hopefully the days of associating these with ‘hippies’ or ‘tree huggers’ are over, as its realised that they can make real business sense. However, perhaps the conversation needs to turn towards efficiency instead. Developing countries need growth and the developed world needs to lead the way. 50% of emissions are produced by 10% of the global population currently, which is a stark truth to come to terms with.

We hope for a future where renewables can not only change this, but eradicate energy poverty altogether. As an investment community we need to all work together and not leave it to the usual few to vastly increase the scale of investment in renewable technologies. This can be done whilst emphasising the real returns that can be gained through sustainability, as well as its business value.

Last year will surely be seen as a tipping point for action on climate change, if only because of the agreement that came out of COP21. But many are sceptical as to whether this is really enough to catalyse the change that needs to happen to slow down or stall the heating up of our planet. Many companies are putting plans in place for 2050, when we need to see action by 2020, and there is still too much corporate lip service regarding these issues overall. We need to see obligations rather than targets, CSR teams and initiatives shouldn’t be marginalised but embedded into business objectives and standard practice. In the meantime, both businesses and individuals need to make profound changes to their everyday lives in the short term, without impacting on profitability or the quality of experience associated with organisations, if we are to get serious about combatting climate change.