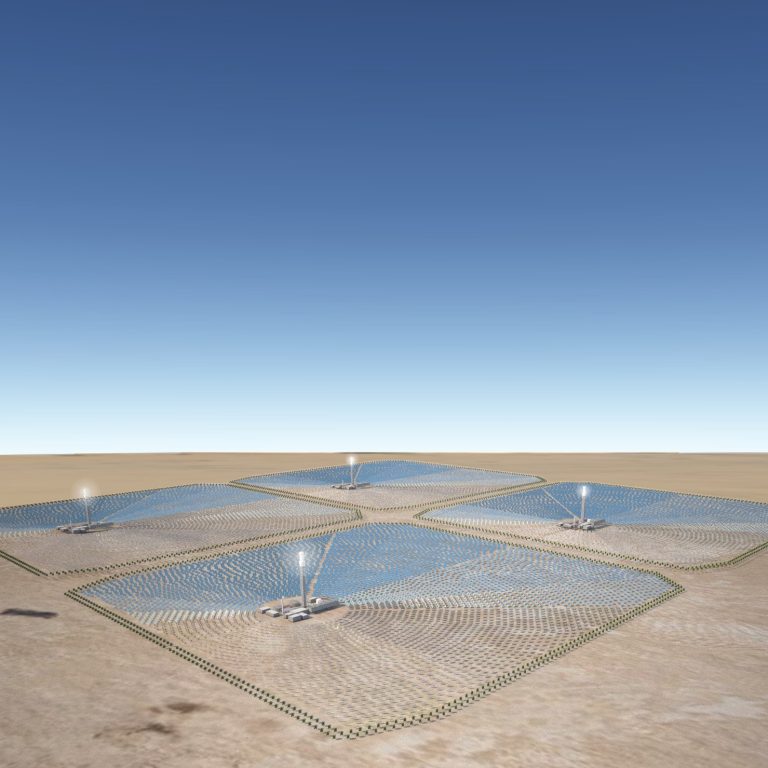 Renewable energy investment company, Low Carbon and utility scale solar developer Nur Energie, are partnering in the development of their TuNur project. TuNur is a flagship 2GW solar export project in the Tunisian Sahara which will be connected to the European electricity grid via a dedicated cable.

The project will produce almost twice as much energy as any of the UK’s current nuclear power plants and can even produce power when the sun is down.

The project is currently undergoing permitting in Tunisia and Europe, and is set to reach financial close and start construction in 2016. When the project comes online in by late 2018 it will provide clean and reliable power to more than 2.5 million UK homes.

Today’s announcement of the commitment from Low Carbon and Nur to take the TuNur project forward to the next stage follows the significant milestones achieved over the course of the project’s development which have provided confidence in its success. The majority of the project’s feasibility and preliminary licencing has now been completed including an offer of a 2GW grid connection solution (“STMG”) from Terna, the Italian grid operator, for an interconnection point in Italy. The project is now entering into the next stage of permitting and development, putting it on track to start construction by the end of 2016.

Energy security is currently a key concern for European countries, following disruptions to energy supplies due to the unsettled situation in the Ukraine and the Middle-East. European authorities have called for member states to take active steps to reduce their dependency on fossil fuels, potentially by investing in renewable technologies. Furthermore, as global demand for renewable energy rises, it is becoming increasingly important that renewable energy projects are built to a scale that has a significant impact on the decarbonisation of electricity grids.

Africa presents many new exciting investment opportunities for the renewable energy industry, with its abundance of solar and wind resources. According to the European Commission’s Institute for Energy, 0.3 % of the sunlight that shines on the Sahara and Middle Eastern deserts could supply all of Europe’s energy needs. Investing in such regions is crucial for diversifying our energy supplies for the future.

Roy Bedlow, chief executive officer at Low Carbon said: “With the right level of investment, large scale renewable projects such as TuNur can be very competitive in the energy market and demonstrates that renewables make business sense. By harnessing the power of the sun, we can challenge other means of energy generation such as nuclear power or burning fossil fuels, which have multiple, long-term negative effects. Large scale solar projects, in Europe and Africa are a vital part of diversifying and securing Europe’s energy supply, while creating a low carbon economy.”

Kevin Sara, chief executive officer of Nur Energie commented: “Nur Energie has been focused on utility scale climate change mitigation by opening new energy doors. The TuNur project with the recent investment by Low Carbon, will help drive this strategy and together we will be a force in striving to secure and decarbonise Europe at an affordable price”.

He added: “Recent news around Desertec (Dii) has raised some questions about the concept of North African solar. CSP is a proven technology and the Sahara is an area of optimum solar resource, as demonstrated by our three year study showing direct normal irradiance (“DNI”) of 2,500kWh/m2/Yr.  Successful Government programmes such as MASEN in Morocco prove that developing solar in the Sahara is a cost effective source of renewable energy today. This coupled with the growing energy demand and need for low carbon and non-intermittent power in Europe makes North Africa an optimum region for large scale solar development. Governments, investors and developers – including many of those involved in Dii – remain enthusiastic about the validity of this solution. The TuNur project, which has no relation to Dii, is being developed with a clear strategy and has the backing of investors who are fully behind the project.”

Low Carbon recently increased its stake in Nur Energie to become one of the company’s largest shareholders.

Low Carbon invests in renewable energy companies and projects embracing innovations such as solar photovoltaic, concentrated solar power, wind and anaerobic digestion technologies. So far, through its investments, the company has funded, is building and/or operating sustainable initiatives with a renewable energy capacity of more than 350MW.

Nur Energie is an independent solar power plant developer focused on significant climate change mitigation by opening new energy corridors. Nur is developing utility scale concentrated solar power (“CSP”) and photovoltaic (“PV”) projects in Southern Europe and North Africa that are capable of producing low carbon, base load power at competitive prices, all whilst generating significant socio economic benefits within the regions it develops in. Nur currently has over 2,200MW of under development in Greece, Morocco, Tunisia and France.