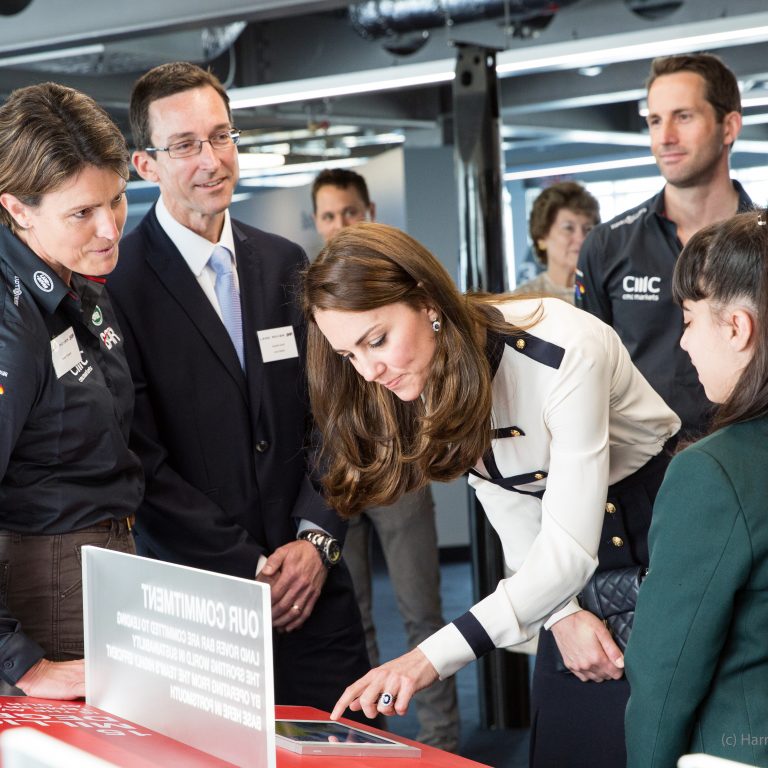 The ‘Tech Deck’ offers visitors a unique behind-the-scenes experience with hands-on interactive exhibits, enabling young people to get close to the boats, technologies and sustainability initiatives that will enable the team to fly faster, sail smarter and be more sustainable – the goal being to bring the America’s Cup home for the first time in its 165-year history.

The ‘Tech Deck’ has been developed for Key Stage 3 of the National Curriculum with the aim of nurturing young peoples’ interest in Science, Technology, Engineering and Maths (STEM). Throughout the education centre, interactive exhibits demonstrate the role that science, technology and sustainability play in building a leading sporting team.

In support of the team’s quest to be sustainable, Low Carbon the renewable energy investor and renewable energy partner to Land Rover BAR, has developed three interactive displays highlighting how the team is harnessing tidal, wind and solar energy to help them achieve the best possible performance while being as sustainably as possible.

In 2015, Low Carbon installed a commercial rooftop solar installation at the home of Land Rover BAR with a generating capacity of 114kW. A key feature of the Tech Deck and the sustainability display is that the solar panels installed at the base are visible from the Education Centre, helping to bring renewable energy to life for the next generation.

More recently, Low Carbon in collaboration with Land Rover BAR, invested in a new rooftop solar installation at the Northern Parade Schools in Portsmouth. Both installations – saving a combined 90 tonnes of CO2 each year – provide the team and the schools with free electricity, with all subsidy revenues being to the benefit of the 1851 Trust.

Ben Ainslie Racing (BAR) was launched on June 10th 2014 in the presence of Her Royal Highness The Duchess of Cambridge. The team was conceived by four times Olympic gold medalist and 34th America’s Cup winner, Sir Ben Ainslie, with the long-term aim of challenging for Britain and bringing the America’s Cup back home to where it all began in 1851. Ben has developed and will lead a British entry capable of winning the prestigious trophy, something Britain has so far never managed to achieve. Land Rover BAR is a commercial sporting team, with a number of individual private investors alongside corporate partners. The team is made up of some of the best British and international sailors, designers, builders and racing support. Sports teams represent key role models in society. This privileged position is not taken for granted at Land Rover BAR. The team believe our influence should extend far beyond the race course, and have put sustainability at the heart of operations since launching the team with Exclusive Sustainability Partner 11th Hour Racing in 2014. The team have built a new headquarters in the centre of Portsmouth, the 74,000 sq ft. building houses all the team’s activities, and will welcome the public into a Visitor Centre hosted by the 1851 Trust. The Trust is the team’s official charity, and HRH The Duchess of Cambridge is its Royal Patron.

The 1851 Trust aims to inspire and engage a new generation through sailing and the marine industry, providing young people with the education, skills and training to become innovators of the future, and stewards of the marine environment. The Trust is supported by Land Rover BAR, the team to bring the America’s Cup back to Britain – a trophy that left these shores in 1851, a trophy that Britain has never won.